The channel is specially designed for boiling flow experiments. The liquid fluid flows through a square duct test section, which is heated from beneath. With increasing input of heat nucleate boiling sets in at the bottom of the thermal boundary layer. The test section is optically accessible through windows on its top and side walls to measure the flow velocities using LDA and to observe the boiling bubble dynamics using a high speed camera, as well. The boiling curves for individual absolute inlet pressures and velocities ranging from 1 to 2 bars and 0 to 3m/s, respectively, are obtained by recording simultaneously the wall heat fluxes versus the wall temperatures. 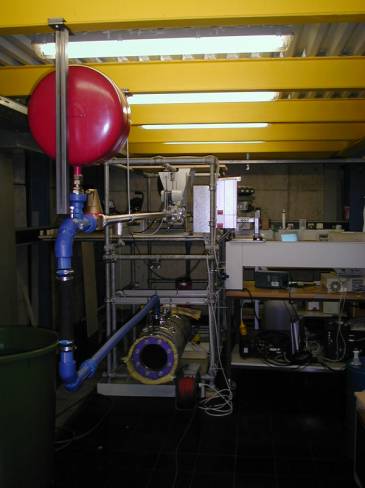 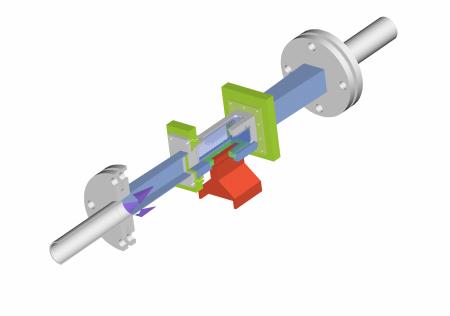 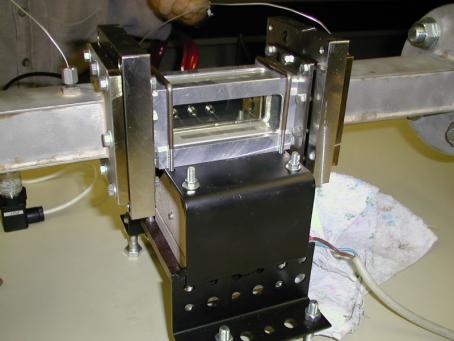 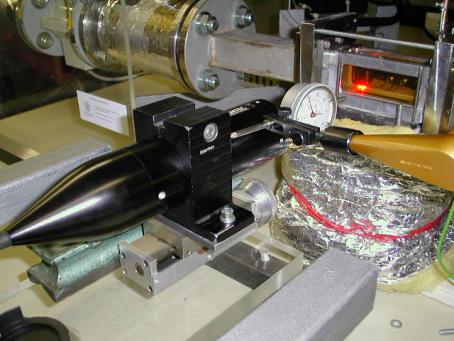 This test facility was first established within the framework of the Christian-Doppler-Laboratory for Continuous Solidification Processes. Originally, it was especially designed for model investigations of problems in steel casting processes: clogging phenomena and pressure distributions at the entrance of submerged entry nozzles.
During 2002, it was largely extended as one part of a diploma thesis (further details may be found here).In the new configuration the gravity driven flow from the tundish into the mold via different submerged entry nozzles (SEN) may be investigated. The flow rate out of the tundish may be controlled by a stopper. The entrance of a usual SEN is equipped with 6 pressure transducers, while the pressure distribution along the following straight section (possibly with changes in cross-sectional area) may be measured via five additional pressure transducers. Steady state conditions may be achieved via return flow controlled by a pump and adjustable regulation valves. The complete measurement chain is software controlled through field-point modules from National Instruments in combination with LabView-Acquisition software.

This test facility was established within the framework of the Christian-Doppler-Laboratory for Continuous Solidification Processes. It was designed for investigations of bubble formation from porous refractories used in gas purging for impurity removal during steel casting processes. Bubble formation from single holes as well as groups of holes may be investigated, both for wetting and non-wetting materials under different pressure conditions and for a great variety of inclination angles of the surface. During 2002/2003 the test facility was equipped with a precise gas-mass flow controller and optical systems for determination of bubble shape and detachment frequencies. 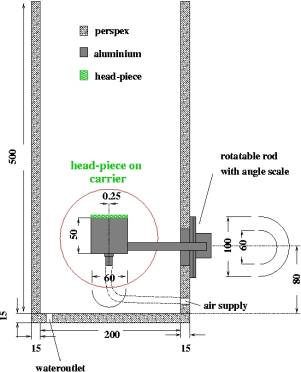 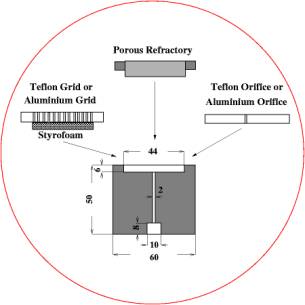 A complete 2D-PIV-System is available at the institute. This DANTEC-System consist of

This system was extensively used for investigations of Low-Reynolds-Number-flows of suspension droplets. The droplets were released from a needle (like a medical syringe) into a relatively large reservoir of quiescent ambient fluid. The droplets consisted of pure glycerine and a small volume fraction of tiny glass beads, and the ambient fluid was pure glycerine. The drop formation and was investigated from the initial stages up to the disintegration from toroidal structures due to Raleigh-Taylor instabilities. For comparison, numerical results were also provided. 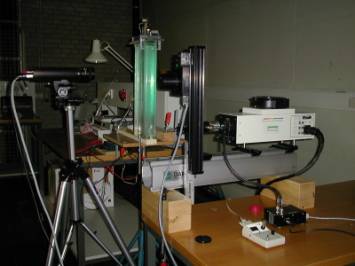 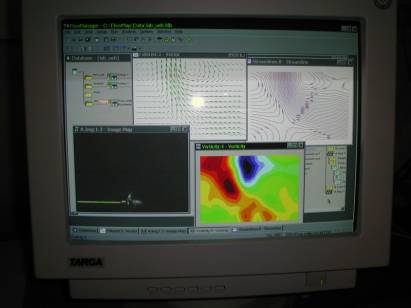 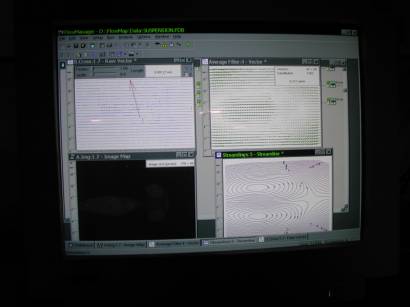 Laser-Doppler anemometry (LDA) is a well established optical technique for measuring flow velocities. The velocities are measured at the position of the probe volume of the LDA system formed by the intersection of two laser beams of equal intensities. Particles moving at the velocity of the fluid penetrate this probe volume and scatter light. The two scattered light waves are Doppler shifted such that they exhibit different oscillation frequencies of the electric field vector. Their interference at the position of the detector leads to a beat signal with a frequency representative for the particle velocity.

The photograph shows the two-component LDA system available at the institute. The measurements are carried out under the backscatter angle of 180°. The system may be used in forward scatter arrangements also, applying a detector unit normally used to extend the system to a phase-Doppler anemometer.

Typically the LDA technique is applied to liquid channel and aerodynamic flows, in research on transport phenomena and turbulence. Further applications concern dispersed flows, where the particle velocities are of interest. 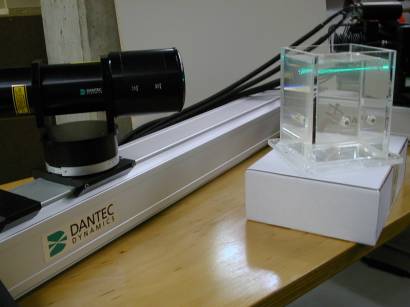 Phase-Doppler anemometry (PDA) was developed as an extension of laser-Doppler anemometry on the basis of an idea by Durst and Zaré from 1975 to extract more information from the light scattered by particles from an LDA probe volume. For doing this, PDA employs more detectors than LDA and measures the particle size using a phase shift between the beat signals detected at different locations in space. A PDA system with a two-component transmitting optics unit can therefore yield three measured quantities of particles - two velocity components and the size. A prerequisite for meaningful size measurements is the spherical shape of the particles and the homogeneity of the particle material. The measurements are local at the position of the probe volume, just as with LDA.

The photograph shows the two-component PDA system available at the institute. The optical layout of the PDA system is adapted to the respective measurement problem. A result of the optical layout is the laser beam intersection angle, the scattering angle where the receiving optics unit is to be placed, and the elevation angles of the photodetectors. 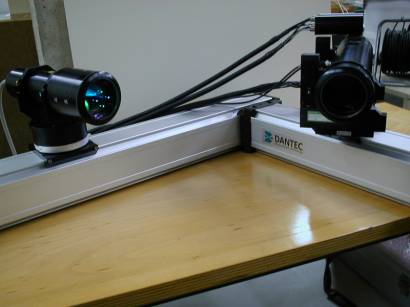 Typically the PDA measuring technique is applied to dispersed two- or three-phase flows, such as sprays and multiphase channel or pipe flows with a liquid carrier phase and gaseous or solid disperse phases.

Extended versions of PDA may include up to four photodetectors, e.g. for measuring the particle refractive index further to the size and velocity (EPDA or the Dual-Burst technique), and for distinguishing between different particle species (like, e.g., solid particles and bubbles in a liquid flow). The most recent development in PDA is the Dual-Mode PDA, which stands out for an optimised configuration of the detectors.

A levitator is a device for positioning objects at a fixed location in space. The present device makes use of the quasi-steady pressure distribution of a standing acoustic wave for levitating small fluid or solid objects, such as liquid droplets or solid particles, at a well-defined position. The device shown in the photograph is used for investigations of heat and mass transfer between the droplet or particle and the gaseous environment. For this purpose, temperature and humidity of the ambient can be varied in wide ranges. 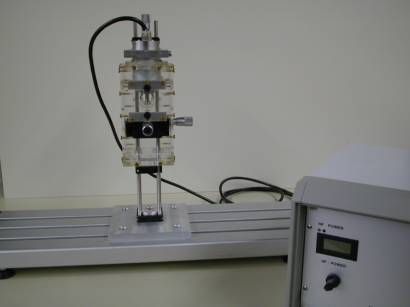 Measurements are carried out using image processing techniques. The hardware essentially consists of a video camera and a light source, which are not shown on the photograph. The data are acquired through the frame-grabber card of a PC. For droplets, the time-dependent volume and the equivalent diameter are measured. From these data we deduce the droplet surface and the evaporation rate as functions of time.

Objects in the acoustic wave like the evaporating droplet induce the formation of a so-called acoustic streaming flow, a steady secondary flow in the form of two toroidal vortices, one above and one below the levitated droplet. The following photograph shows a meridional section of the vortex above a levitated methanol droplet of volume 1.5µl, i.e. a diameter of 1.42mm. 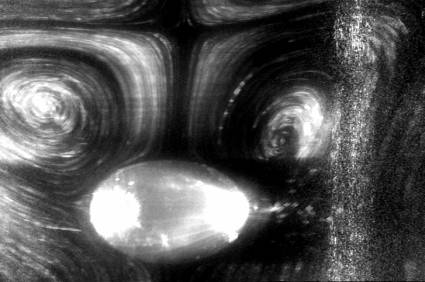 For achieving properly interpretable experimental data, it is necessary to keep the vortices free from the vapour coming from the droplet. An enrichment of vapour in these vortices would otherwise reduce the evaporation rate and lead to unexpected results, since the ambient air is in cases of evaporating hydrocarbons free of vapour.

Information on the drying behaviour of, e.g., suspension droplets is achieved from investigations with the acoustic levitator. An important part of the results is the subsequent representation of the porosity e of dry grains as a function of the drying conditions and initial droplet properties.

This device was designed for investigating viscoelastic, strain-hardening liquids in uniaxial elongational flows. The liquid sample is placed between the faces of two circular cylinders. For the measurement, the upper cylinder is moved upward a well-defined distance in a very short time, so that a filament of liquid with constant length is produced. Due to the action of surface tension, the diameter of the (nearly cylindrical) filament decreases with time. The optical installation of the device, which consists of a laser diode for illuminating the filament and a PIN photodiode for detecting the light intensity, measures the evolution of the filament diameter with time by a simple shadow technique. The output voltage of the photodiode is proportional to the filament diameter, i.e. to the width of the shadow of the filament projected onto the light-sensitive area of the diode. The voltage is converted into length by a calibration procedure. The essential result of a measurement is a relaxation time of the fluid in uniaxial flow, from which the corresponding elongational viscosity can be derived as a function of time.

The device applies a step-strain deformation to the liquid sample, i.e. it deforms the sample in a very short time, which may be adjusted by varying the voltage which drives the solenoid used for moving the upper cylinder. This technique allows relaxation times down to some few milliseconds to be measured. The following photograph shows a filament of an aqueous 1000ppm solution of the polyacrylamide Praestol 2540 (Stockhausen Ltd, Germany) between the flat cylinder faces. For achieving correct measurement results, it is essential that the surface of the cylinders be wettable for the liquid. The faces of the present device are coated with thin glass plates, since most of the experiments carried out so far concerned aqueous solutions.

The elongational rheometer was applied to research in the field of atomization of viscoelastic liquids and on viscoelastic body fluids. In the former field, a universal characterization of the liquids was achieved, which allows the Sauter mean diameters of sprays produced of various liquids by flat-fan pressure atomizers and pressure-swirl atomizers to be represented by a universal correlation. The relaxation time appears in the Reynolds number Re, which is formed with a representative elongational viscosity µel rather than with the shear viscosity. The latter was used, e.g., by Ohnesorge in his work about liquid jet disintegration. In all liquid break-up processes involving filament thinning, the elongational viscosity is the significant fluid property.