The research in this field was focussed on the computation of the propagation of intense shock waves. Thereby, expanding as well as the converging waves were considered. The individual studies investigated several effects which may have a significant influence on the flow behind the shock. In particular, the influence of real gas behaviour, radiation, varying density and pressure ahead of the shock, and the contamination of the gas with solid particles were considered. The solutions were mostly obtained within the framework of self-similarity.

A typical flow configuration of an expanding spherical shock is shown in the figure below. 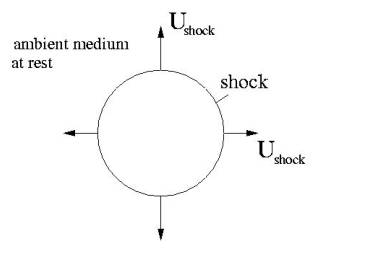 Flow Field and Particle Distribution of a Suspension in a Source-Sink Free Surface Flow with Gravity and Centrifugal Separation, and its Application to the Separation of Impurities in continuous Casting of Metal

Advanced technological applications, e.g. rails for high-speed trains and extra-thin wires, require high quality steel with an extremely low concentration of impurities, typically alumina (AI203). The understanding and control of the flow of impurities in metal casting processes is therefore of great importance. Especially in continuous casting AI203 impurity-particles follow the main flow from the ladle via the tundish to the mold (Schrewe 1987). In order to improve the quality of the steel it is necessary to collect the impurities in the slag that covers the molten steel in the tundish. Therefore often baffles and bubbling devices are installed that should force the buoyant Al203 particles to move quickly to the top for forming a more or less concentrated layer of impurities just underneath the slag. However, from practical and experimental observations it is well known that the process of refilling the usually discontinuously operating tundish from the ladle and flow separation resulting from installments lead to the formation of strong vortices. Consequently, the impurity particles undergo separation and resuspension processes which cause them to move towards the axis of rotation. When a bath-tub vortex emerges above the drain of the tundish the particles are sucked into the mold. In the worst case the bath-tub vortex gives rise to a free surface flow with a dip similar to a rinsing spot. This flow may be a "critical" flow, which is able to carry slag into the mold, thus reducing drastically the quality of the casted steel and occasionally causing irreversible damage to the product. A background rotation of the system with an angular velocity W may have a strong influence on the behavior. A sketch of a pertinent model for this flow-field is given in Fig. 1. As shown in this figure, the volume flux Q of liquid metal (in which lighter impurity particles are dispersed) enters the region of interest with predominant radial velocity, and leaves axially through the drain; a swirling motion represented by w and a background rotation represented by W are assumed to strongly influence the velocity and particle concentration profiles that develop inside tlie liquid. The upper interface is open to the atmosphere where a constant pressure Rat is assumed. At the "critical" condition the free interface is sucked into the drain, which means that slag may reach the mold. The proper theoretical formulation, understanding and simulation of this complex flow and separation process is essential to the optimization of this ? and similar ? casting processes. The need for this investigation is the major motivation of this proposal.

We propose to simulate the velocity and particle concentration, in the region of interest described in Fig. 1, in the framework of a "mixture" approach (Ungarish 1993), and use the "shallow water" approximation for the (almost) inviscid interior bounded by a free surface on top, and the Ekman layer approximation for the viscous botindary region at the bottom. The resulting formulation is expected to be amenable to efficient parametric studies. A combined gravity-centrifugal settling driving force acts on the impurity particles which are typically of lower density than the embedding liquid metal. Based on earlier investigations on swirl flows (Greenspan 1968, Whitehead 1985, Ungarish 1997) we plan to study the separation process (Ungarish 1993) and the resuspension (Schaflinger et al 1990) of impurities. In a previous study the proposers have shown that under the assumption of an Oseen vortex flow the lighter impurities quickly move to the axis of rotation. There the particles may accumulate in a very concentrated domain, even if the initial concentration of impurities is sinall (Schaflinger & Mang 1996). However, a more refined model, as proposed here, is necessary to account for viscous effects and a free surface. The ultimate aim of the proposed investigation is to better understand the two-phase flow in a tiindish by taking into account wall-effects and a free surface at top. Knowledge of the underlying physics should provide means for altering the flow to avoid the drainage of impurities into the mold and thus improving the quality of the caged metal. In particular, the effect of an external background rotation as a mechanism for improving the process will be investigated.