The arrangement of talks can now be found in the schedule. Each talk is indicated by the corresponding EasyChair submission number. 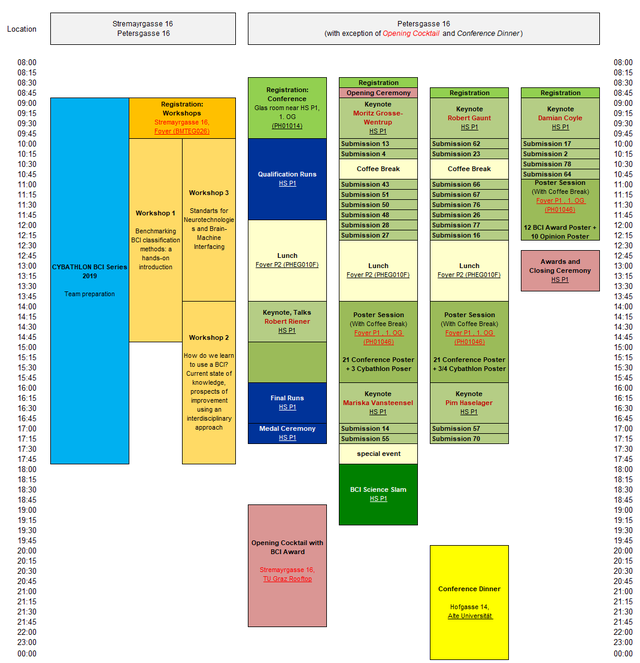 The program book with detailed information about talks and posters can be found here!

We are very proud to present you the confirmed keynote speakers of the GBCIC2019. In alphabetic order:

"Decoding mental imagery from EEG, is it a matter of time?"
Abstract: Research in the field of brain–computer interfaces (BCIs) and neurotechnology has proven that electrical signals in the brain, modulated intentionally by mental imagery, can relay information directly to a computer, where it is translated by intelligent algorithms (some inspired by the brain’s neural networks) into control signals that enable communication and control without movement. This talk will show that people with restricted abilities resulting from disease or injury may benefit from this technology, for example, those who have prolonged disorders of consciousness or locked-in syndrome following traumatic brain injury.
Neural activity can be modulated by many kinds of mental imagery e.g., classical motor imagery BCIs distinguish between imagined hand/arm movements. This presentation will show recent results in decoding imagined three-dimensional limb movements, imagined primitive shapes, emotion inducing imagery and silent speech from EEG. The presentation will attempt to address the question is it feasible to expect high and robust performance with these types of imagery in EEG-based BCIs and will highlight results which indicate user proficiency in BCI control is a matter of training time, machine learning/AI ability, and application of the technology.
Training over multiple sessions is certainly key to learning how to modulate brain activity via a motor imagery and this involves the collection of large dataset from multiple users. An AI-enabled wearable neurotechnology and cloud technologies platform that can enable this and is capable of streaming, storing, visualising and analysing big brain data in real-time from multiple parallel users from any location will also be described in this talk.

Bio: Damien Coyle, Professor of Neurotechnology, is currently Director of the Intelligent Systems Research Centre and Research Director in the School of Computing, Engineering and Intelligent Systems at Ulster University.
He has published over 130 research papers in areas such as computational intelligence/AI, bio-signal processing, computational neuroscience, neuroimaging, neurotechnology and brain-computer interface (BCI) applications and has won a number of prestigious international awards for his research including the 2008 IEEE Computational Intelligence Society (CIS) Outstanding Doctoral Dissertation Award and the 2011 International Neural Network Society (INNS) Young Investigator of the Year Award. He was an Ulster University Distinguished Research Fellow in 2011, a Royal Academy of Engineering/The Leverhulme Trust Senior Research Fellow in 2013 and a Royal Academy of Engineering Enterprise Fellow in 2016-2017. He is a founding member of the International Brain-Computer Interface Society, a Senior member of the IEEE and chairs the IEEE Computational Intelligence Society (CIS) UKIreland chapter.
Professor Coyle is also CEO of NeuroCONCISE Ltd, the Ulster University spinout company he founded in 2016 to build wearable neurotechnology that non-invasively measures and translates brainwaves into control signals using advanced algorithms to enable people to interact with technology and communicate without moving which has applications in rehabilitation, diagnostics, augmentative and assistive communication devices and entertainment. 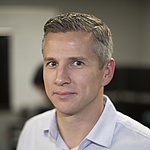 "High performance bidirectional brain computer interfaces"
Abstract: Over the past decade, several groups have implanted microelectrode arrays into the motor cortex of paralyzed individuals. At the University of Pittsburgh, we have worked with two participants and have shown that recording and decoding the activity of a few hundred neurons in motor cortex enables a person to control a prosthetic arm with up to 10 degrees-of-freedom continuously and simultaneously. However, most brain computer interfaces have lacked the ability to restore any sense of ‘touch’. In this seminar, I will discuss how we have used electrical microsimulation in the primary somatosensory cortex to restore lost cutaneous sensations, what stimulation in the cortex feels like, how these sensations can remain stable over many years and how restoring artificial touch can improve performance in real-world motor control tasks. Ultimately we aim to restore dexterous hand and arm movements, complete with the appropriate sensory experiences, to people who have lost their limbs or are unable to use them because of injury or disease.

Bio: Robert A. Gaunt is an Assistant Professor in Physical Medicine and Rehabilitation at the University of Pittsburgh. Robert earned a B.Eng. degree in Mechanical Engineering from the University of Victoria (Victoria BC, Canada) and a Ph.D. in Biomedical Engineering at the University of Alberta (Edmonton AB, Canada) in 2008. He completed his postdoctoral training with Doug Weber at the University of Pittsburgh. His primary research interests are in the area of sensorimotor control and the development and translation of advanced neuroprosthetic devices. Active research topics include developing novel neural interfaces to regulate bladder function, developing prosthetic controller systems for amputees that enable dexterous hand movements through implanted myoelectric interfaces, and developing bidirectional implantable brain machine interfaces for upper limb prosthesis control. He holds a number of patents and his work has been covered by numerous national and international media outlets.

"Brain-Artificial Intelligence Interface (BAIs)"
Abstract: The introduction of machine learning into the field of BCI, which began almost two decades ago, enabled unprecedented performance. Today, machine learning algorithms have become an indispensable component of a BCI. Machine learning, however, has undergone a radical transformation in the past two decades, resulting in artificial intelligence (AI) systems that surpass human performance in many real-world tasks. I argue that it is time for the BCI community to embrace these developments and build Brain-AI Interfaces (BAIs), i.e., systems that leverage the power of modern AI systems to enable natural human-computer interaction. In particular, I argue that to realize BAIs we will have to move beyond our dominant decoding paradigm, in which we determine a priori the labels we intend to decode from neural signals, and let the AI system decide the level of granularity at which cognitive processes are represented in neural signals.

Bio: Moritz Grosse-Wentrup is full professor and head of the Research Group Neuroinformatics at the University of Vienna, Austria. He develops machine learning algorithms that provide insights into how large-scale neural activity gives rise to (disorders of) cognition, and applies these algorithms in the domain of cognitive neural engineering, e.g., to build brain-computer interfaces for communication with severely paralyzed patients, design closed-loop neural interfaces for stroke rehabilitation, and develop personalized brain stimulation paradigms. He has received numerous awards for his work, including the 2011 Annual Brain-Computer Interface Research Award, the 2014 Teaching Award of the Graduate School of Neural Information Processing at the University of Tübingen, and the 2016 IEEE Brain Initiative Best Paper Award.

"Constructive ethics in BCI"
Abstract: Constructive ethics aims to identify concerns in order to assist in the development of applications that are well accepted by users and stakeholders. I will explain this type of ethics by discussing potential implications of BCI for a user’s sense of agency and responsibility for action.

Bio: Pim Haselager is associate professor at the Donders Institute for Brain, Cognition, and Behaviour and the Dpt. of Artificial Intelligence of the Radboud University, Nijmegen, The Netherlands. His research focuses on the societal implications of Cognitive neuroscience and Artificial Intelligence, focusing on applications of Robotics, Brain-Computer Interfacing, and Brain Stimulation. He is particularly interested in the integration of empirical work (i.e. experimentation, computational modeling, and robotics) with philosophical issues regarding knowledge, identity, agency, responsibility and intelligent behavior. He publishes in journals such as Nature: biotechnology, American Journal of Bioethics, Neuroethics, Journal of Cognitive Neuroscience and Journal of Social Robotics. 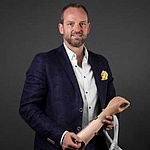 "The Cybathlon Moves People and Technology"
Bio: Robert Riener is full professor for Sensory-Motor Systems at the Department of Health Sciences and Technology, ETH Zurich, and full professor of medicine at the University Hospital Balgrist, University of Zurich. His work focuses on the investigation of the sensory-motor interactions between humans and machines and the development of user-cooperative rehabilitation robots, exoskeletons and virtual reality technologies. Riener has published more than 400 peer-reviewed journal and conference articles, 20 books and book chapters and filed 23 patents. He is the initiator and organizer of the Cybathlon for which he was awarded with the European Excellence Award 2017, the Yahoo Sports Technology Award 2018 and the Honorary Doctoral Degree from the University of Basel in 2018.

"An ECoG-based BCI for communication in LIS: Possibilities and Challenges"
Bio: Mariska Vansteensel received her PhD in Neurophysiology 2006 at Leiden University, The Netherlands. She joined the BCI research field in 2007 and is currently an Assistant Professor at the UMC Utrecht Brain Center, Utrecht, the Netherlands. The main focus of her research is the development of an implantable Brain-Computer Interface (BCI) for communication in severely paralyzed people, based on electrocorticographic (ECoG) electrodes. Since 2013, she investigates the usability of a prototype ECoG-BCI in the daily life of people with severe motor impairment. The first outcomes of this research were widely covered in international media. Currently, she focuses on utilizing the detailed organization of the sensorimotor areas for higher-dimensional ECoG-BCI control. Her other research interests include the representation of brain functions in healthy and diseased children and BCI’s for children with motor impairment. Since 2018, she is board member of the BCI Society.