Our group develops new methods for  Magnetic Resonance Imaging (MRI) with the goal of faster, more robust, and quantitative imaging. Our research interests extend from the development of fundamentally new measurement techniques to the translation of new methods into clinical use. Methodologically, we mostly focus on computational imaging methods that combine advanced numerical algorithms for image reconstruction with jointly designed data acquisition techniques.

ENLIVE is our new algorithm for efficient and robust calibrationless parallel MRI. ENLIVE is based on NLINV but also integrates an important feature inspired by ESPIRiT: The classical SENSE model is relaxed to make the algorithm more robust to model violations. 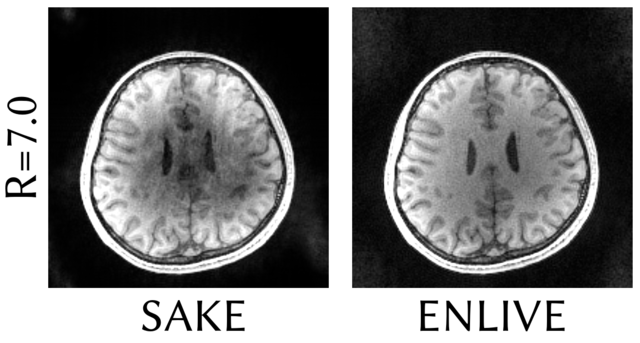 Figure: A comparison of ENLIVE vs SAKE as another calibrationless parallel imaging method which is based on structured low-rank matrix completion. Reconstruction time when using a single core was 22 seconds for ENLIVE and 6.3 hours using SAKE (Holme et al. 2019).

ESPIRiT is an algorithm for autocalibrated parallel MRI, which combines the robustness of the GRAPPA method with the speed and flexibility of a SENSE-based reconstruction methods. The corresponding publication with Peng Lai (GE Healthcare), Michael Lustig (UC Berkeley) and colleagues is the highest-cited research paper published in the year 2014 (after two years) in Magnetic Resonance in Medicine, the leading jounral in MR methodology. Implementations of ESPIRiT calibration and reconstruction are available in our reconstruction toolbox.

Figure: Images of a human brain acquired with a small FOV. While the SENSE reconstruction has an artifact in the center, GRAPPA is free from this problem. Using multiple set of maps estimated with the ESPIRiT calibration method, a SENSE-based ESPIRiT reconstruction is able to produce an artifact-free image similar to GRAPPA (Uecker et al. 2014).

Hiqh quality reconstruction in parallel MRI requires exact knowledge of the sensitivity profiles of the receive coils. In nonlinear inverse reconstruction, image content and coil sensitivities are estimated jointly, which avoids an explicit calibration step and improves reconstruction quality especially if the amount of calibration data is small. The problem leads to a blind-deconvolution problem (although the roles of frequency and time are switched in MRI). Because the technique can be applied directly to non-Cartesian data, it is ideal for real-time MRI with radial data acquisition. In fact, our method for real-time MRI is based on this algorithm.

Compressed sensing is a new technique that can be used to accelerate measurements by exploiting the redundancy (compressibility) of the acquired data. Our publication from 2007 is one of the first examples where this method is used in an imaging application. For more information about compressed sensing in MRI, see this page from Michael Lustig at UC Berkeley who pioneered the use of this technique in MRI. Parallel MRI and compressed sensing can be combined to achieve even higher acceleration for MRI, which is the basis for most advanced image reconstruction methods in MRI. The 2007 paper is the first work to use this important combination. 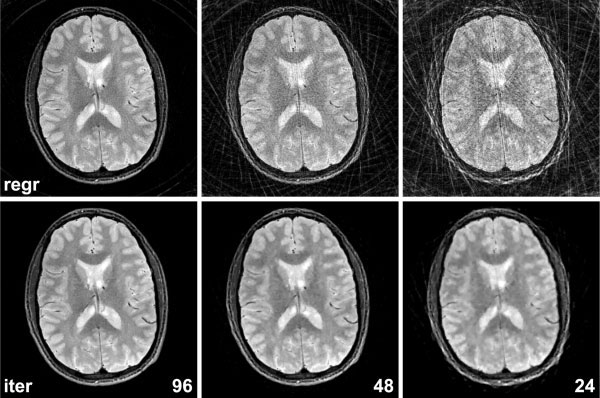 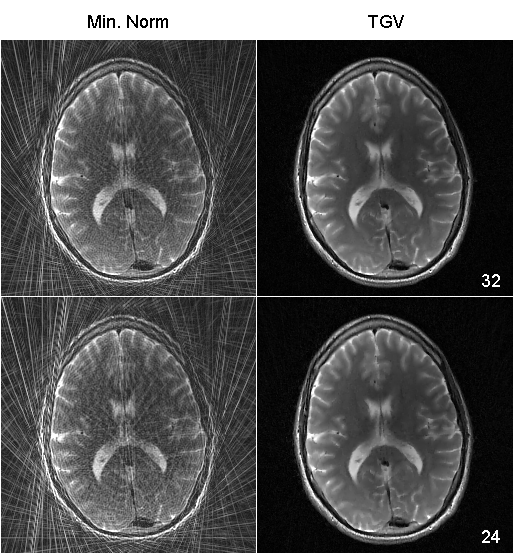 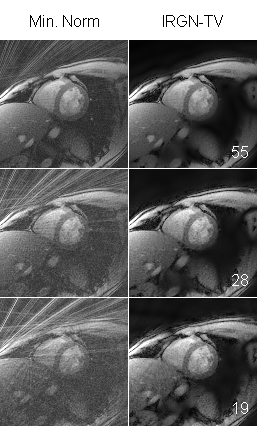