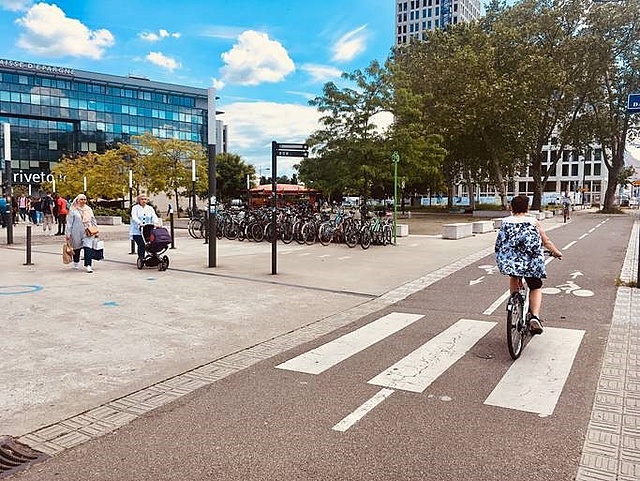 Urban technologies (information and communication technologies ICT) are used worldwide in cities to address current challenges such as urbanisation, global warming, pollution and scarcity of resources. Against the background of global digital technology trends of the last two decades, this dissertation deals on an urban neighbourhood level with spatial framework conditions and spatial transformation in public space. In the current Smart City (SC) literature, the discourse is divided into two thought directions: one is technology-oriented and the other is socially-oriented. In this young field of research, the spatial dimension of the urban digitization process is missing. This dissertation contributes to this research gap by systematically analyzing the spatial interfaces and interactions between physical urban space and digital technologies. The specific research object are urban SC projects with different implemented technologies. The aim is to identify "spatial delays" of digital technologies in the urban environment, such as postal logistics or progressive Car-Sharing possibilities. According to the European SC-model of Giffinger et al. several urban SC-projects with a special focus on the key fields mobility and environment in German-speaking countries are investigated. All SC projects comprise technologies implemented in dense urban areas and in cities with more than 300,000 inhabitants. Within the PhD research, the identified "delays in spatialization" serve future urban planning not only to improve technical and social comfort, but also to ensure a robust spatial improvement of quality in public space.

Airport location - urban development. The intervening as a storeroom

As a result of the functionalization of spaces in the area between the airport and the city, the urban conditions and the current development trend show recognizable topological relationships and morphological structures, which differ significantly from other structures of the periphery and require a hierarchization of spatial organization. They appear as identifiable spatial patterns with certain characteristics predominantly on the outskirts. The theory of the origin, appearance and evolution of these patterns, which is explained by means of specially constructed terms and empirically investigated by case studies, is the subject of this work. The case studies refer to the Austrian provincial capitals Graz, Linz, Innsbruck, Salzburg and Klagenfurt. These are an indicator of the current processes and relationships that trigger airports in metropolitan areas. To capture the logic of urban planning between the airport and the city, a method has been developed that incorporates and embraces concepts of systems science, urban morphology, and topology. In this way, the structural-spatial structure is assessed and it is determined which space-organizational components influence the area between the airport and the city. At the same time, the dependency of urban development on the location of the airport can be seen or it becomes clear whether the airport location operates as a motivation or an obstacle to urban development. Although in the airport environment a large number of actors with different interests are responsible for the complex interaction of different spatial production processes, this planning aspect should be integrated in order to better recognize the potentials and risks that have arisen, for example in the interaction between the airport location and the city the question of whether an airport should be relocated.

What exactly is "the center", or "centrality" and "decentralization" in the urban context. "Central is everywhere - centrality is nowhere!" There are myriads of hybrid terminologies for the terminology of a "center". The city center has hardly moved away from the geographical position, but the importance of "centrality (as nomenclature) in the context of the city" has been assimilated to social lifestyles. "Centers" are unequally central, are unlike city, are uneven urban space: NO - when it comes to the supposed definition of city (a limited area with increased occurrence of physical structures and an indefinite population frequency). YES - if these are quantifiable services. Thus, the pressure on the physically structured, existing (and constantly evolving) space above average and needs increasingly meet demands (in ever shorter intervals) (requirements are all technocratic populist themes of "postmodern urban development" summarize). City is useful for supplies - but no longer room for social needs - the waning boundaries of space - the "centrality - in disperse urban space". When will a center be a center? How far may centers be apart? Are multiple centers the solution to differentiated (or only differentiated) requirements? Can information and communication technologies be new centers? How are they divided and how do they appear in the urban space and how far has the conceptuality of urbanity adhered to the centrality or / or. removed from it?