Team “NITRO: Neurotechnology Inria Team Racing Odyssey” is a Cybathlon BCI series team from Inria (a public research institute dedicated to computer science and applied mathematics) in France. The NITRO team involves two Inria research teams, team Potioc (Inria Bordeaux Sud-Ouest) and team Athena (Inria Sophia Antipolis Méditerranée), each training a pilot for the Cybathlon: Wilfried Panatier in Bordeaux and Karine Leclerc in Sophia. Team NITRO originated from the will of the Inria scientists to finally test and apply the BCI technologies they studied and developed in their research with actual BCI end-users – the Cybathlon BCI series being a unique opportunity to do so. Team NITRO notably relies on the OpenViBE BCI platform that his members have been working on for more than 10 years now.

The NITRO team around Wilfried Panatier is composed of two permanent researchers (Fabien Lotte and Camille Jeunet – Camille being an external collaborator from CNRS), 5 PhD students (Jelena Mladenovic, Léa Pillette, Aurélien Appriou, Camille Benaroch, Aline Roc), a post-doc (Khadijeh Sadatnejad) and an engineer (Thibaut Monseigne). Wilfried trains with us every week in his home near Bordeaux or at Inria Bordeaux. He is accompanied by his care persons Stéphanie Vidal and Maud Van Boxsom. The BCI system used by Wilfried runs with the OpenViBE software, and uses a g.tec g.USBAmp EEG amplifier.

The NITRO team around Karine Leclerc is composed of two permanent researchers (Théo Papadopoulo, Maureen Clerc), a PhD student (Federica Turi), an engineer (Amandine Audino) and an intern (Pierre Giacalone). Karine trains with us every week within the Centre René Labreuille, the medicalized center where she lives close to Cannes. Karine is accompanied by Magali Mambrucchi. The BCI system used by Karine runs with the OpenViBE software, and uses Waveguard caps from ANT and Refa-8 amplifiers. 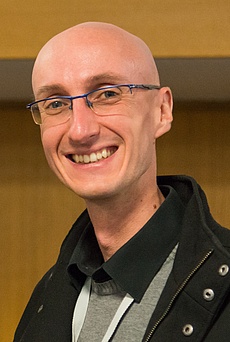