Contemporary AI applications often rely on deep learning, which implies heavy computational loads with current technology. However, there is a growing demand for low-power autonomously learning AI systems that are employed “in the field”. We investigate in this project options for learning in low-power unconventional hardware that is based on spiking neural networks (SNNs) implemented in analog neuromorphic hardware combined with nano-scale memristive synaptic devices.

Experts in each of these fields collaborate on the development of a functional prototype system. We consider in particular recurrent SNNs (RSNNs) as their internal recurrent dynamics render them more suitable for real-world AI applications that have temporal input and demand some form of short-term memory. “In the field” applications often demand online adaptation of such systems, which usually necessitates hardware-averse training procedure. To overcome this problem, we investigate the applicability of “learning to learn” (L2L) to spiking memristive neuromorphic hardware, where the hardware is trained to become a good learner for the target application. In summary, the goal of this project is to build versatile and adaptive low-power small size neuromorphic AI machinery based on SNNs with memristive synapses using L2L. We will deliver an experimental system in a real-world robotics environment to provide a proof of concept.

Our role in the project: We develop learning algorithms for spiking neural networks to be used in L2L applications of neuromorphic hardware. We collaborate with experts for neuromorphic and memristive systems to to guide implementatin of these systems as well as with robotics experts for a proof-of-concept application. 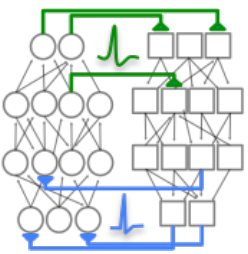 The brain is a complex network that has evolved to optimize processing of real-world inputs by relying on event-based signaling and self-reorganizing connectivity. The scientific and technological objective of the project is to create a hybrid system where a neural network in the brain of a living animal and a silicon neural network of spiking neurons an a chip are interconnected by neuromorphic synapses, thus enabling co-evoultion of connectivity and co-processing of information of the two networks.

Our role in the project: We will develop learning algorithms for spiking neural networks (unsupervised, supervised, and reward-based). Algorithms will first be tested in computer simulations. Hardware experts will then implement these algorithms in cooperation with our team in a spiking neural network chip. The chip will be applied to various tasks within the brain-silicon hybrid system such as the classification of recorded brain network states.

Technological concept for the hybrid system: A neuronal network in the brain of the living animal is contacted by an implantable interface featuring arrays of transducers that can record and stimulate neural signals. Neuronal action potentials are recorded and routed to an artificial spiking neural network (SNN). Biological and SNN signals are further processed by a digital control unit which will be used to stimulate the biological network.

Understanding the human brain is one of the greatest scientific challenges of our time. Such an understanding can provide profound insights into our humanity, leading to fundamentally new computing technologies, and transforming the diagnosis and treatment of brain disorders. Modern ICT brings this prospect within reach. The HBP Flagship Initiative (HBP) thus proposes a uniques strategy that uses ICT to integrate neuroscience data from around the world, to develop a unified multi-level understanding of the brain and diseases, and ultimately to emulate its computational capabilities. The goal is to catalyze a global collaberative effort. During the HBP's first Specific Grant Agreement (SGA1), the HBP Core Project will outline the basis for building and operating a tightly integrated Research Infrastructure, providing HBP researchers and the scientific Community with unique resources and capabilities. Partnering projects will enable independent research groups to expand the capabilities of the HBP Platforms, in order to use them to address otherwise intractable problems in neuroscience, computing and medicine in the future. In addition, collaberations with other national, European and international initiatives will create synergies, maximizing returns on research investment.

During the past two decades, philosophers, psychologists, cognitive scientists, clinicians and neuroscientists strived to provide authorative definitions of consciousness within a neurobiological framework. Engineers have more recently joined this quest by developing neuromorpic VLSI circuits for emulating biological functions. Yet, to date artificial systems have not been able to faithfully recreate natural attributes such as true processing locality (memory anf computation) and complexity (1010 synapses per cm2), preventing the achievment of a long-term goal: the creation of autonomous cognitive systems. This project aspires to develop experimental platforms capable of perceiving, learning and adapting to stimuli by leveraging on the latest developments of five leading European institutions in neuroscience, nanotechnology, modeling and circuit design. The non-linear dynamics as well as the plasticity of the newly discovered meristor are shown to support Spike-based- and Spike-Timing-Dependent-Plasticity (STDP), making this extremely compact device an excellent candidate for realizing large-scale self-adaptive circuits; a step towards autonomous cognitive systems. The intrinsic properties of real neurons and synapses as well as their organization in forming neural circuits will be exploited for optimizing CMOS-based neurons, memristive grids and the integration of the two into realtime biophysically realistic neuromorphic systems. Finally, the platforms would be tested with conventional as well as abstract methods to evaluate the technology and its autonomous capacity.