Even the interaction of light with small molecules, which exist of only a few number of atoms, are complex mechanisms and the electronic structure allows coupling between a vast variety of states and configurations. Our research aims at the detailed understanding of these so called non-adiabatic processes, that proceed during photochemical reactions.

We use a femtosecond laser to excite molecules with a pump pulse and observe the light induced reaction mechanisms by a time-delayed ionization pulse, producing what you may call someway ‘molecular movies’ . By measuring the photoelectrons, the photoions, or also both of them in coincidence (PEPICO, see below), we draw conclusions about molecular transition state dynamics that change after the light-molecule interaction and therefore follow the photochemical reaction in real time. 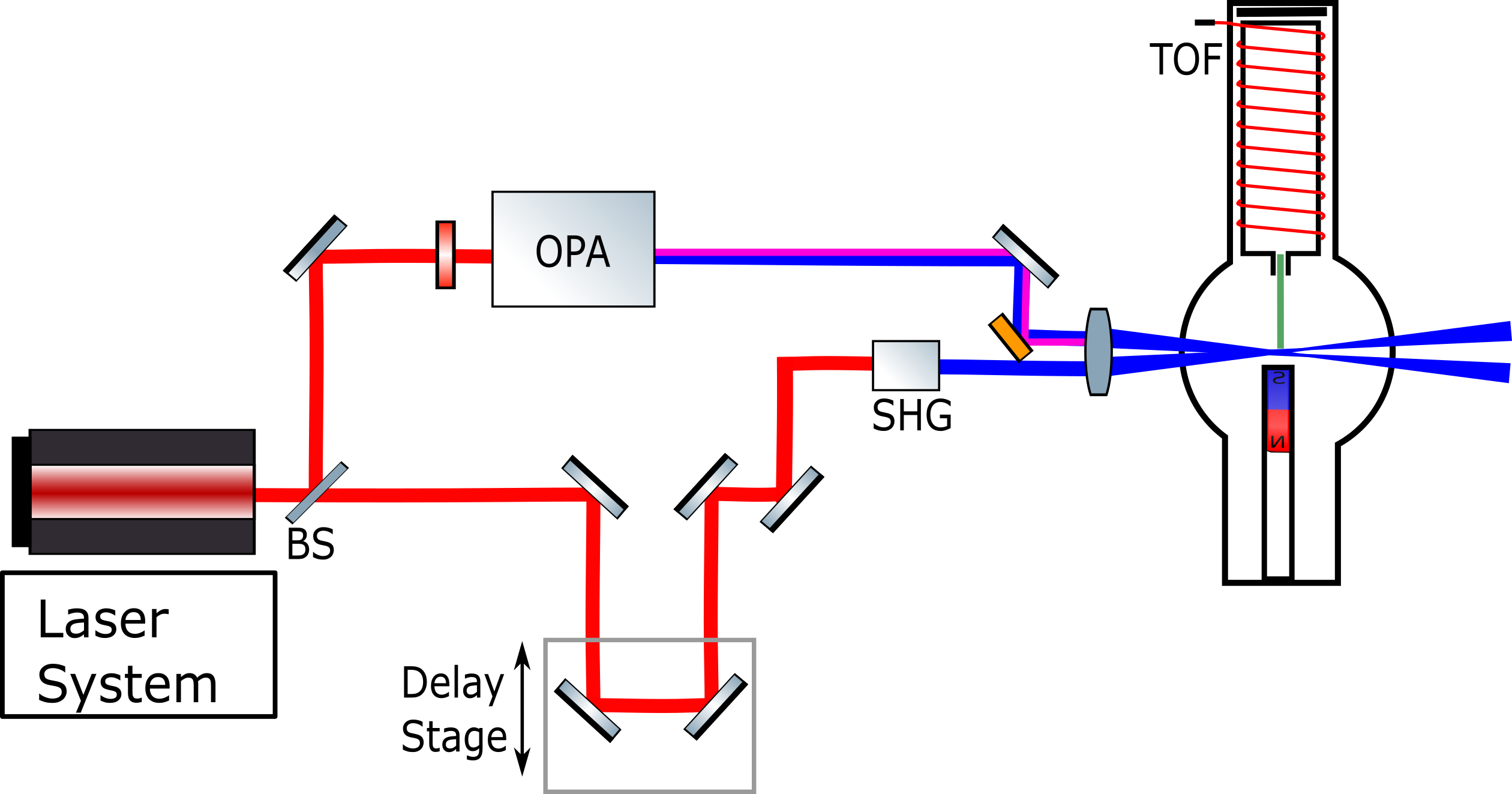 Figure 1: Schematic of our pump-probe setup. Femtosecond laser pulses, that can be frequency doubled, tripled, or generally tuned with an Opcital Parametric Amplifier, succesively excite and ionize molecules in a high vacuum apparatus. The time-of-flight of the electrons and/or ions is measured, which compares directly to their kinetic energy and their charge-to-mass ratio, respectively.

Chemical reactions are always connected with rearrangments of molecular structure and composition and therefore changes in masses of the participating moieties. To get a full picture about the photoinduced dynamics, we measure the probed photoelectrons in coincidence with the ion charge-to-mass ratios. The electron kinetic energy tells us about the electronic structure our investigated system resides in at the moment of ionization, whereas the measured ionic mass ties the connection to the participating molecule of the reaction. 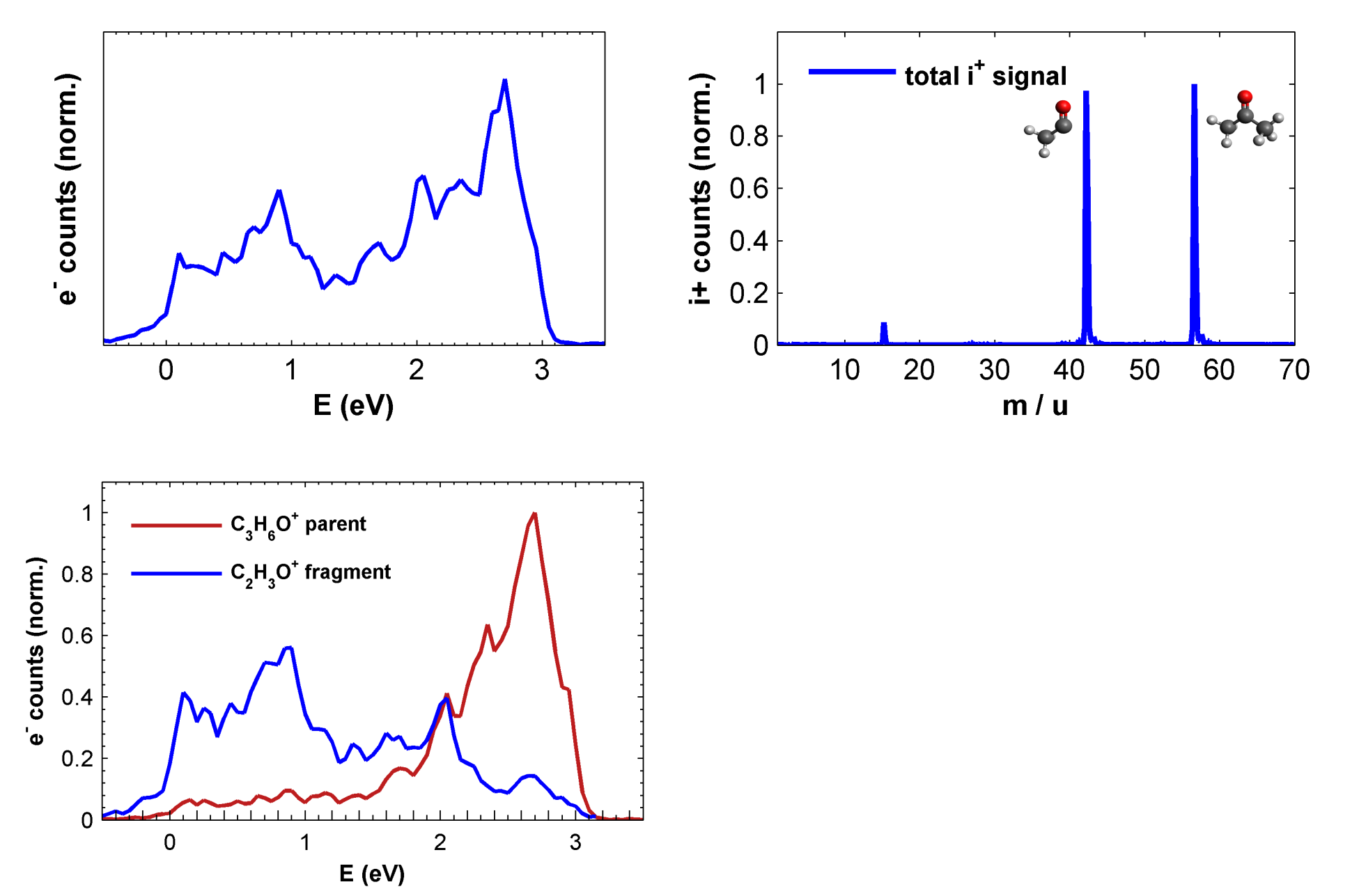 Figure 2: Photoelectron spectrum (upper left) and photoion spectrum (upper right) of the molecule acetone after photoexcitation and subsequent photoionization. The PEPICO sepectrum (lower one) combines both measured yields and connects the photoelectron energies to the photoion masses, giving insight into fragmentation dynamics.

In order to make a clear connection between the electron kinetic energy and ion mass, the assignment of exactly one electron and one ion at the same acquisition event must be made. In order to guarantee that both of them stem from the same ionization event (what we call a true coincidence) and not from multipe events where not all products are measured (what we label then a false coincidence), one usually significantly reduces the ionization rate, which in turn increases the measurment time drastically. Recently, we were however able to overcome this disadvantage by developing evaluation methods based on Bayesian probability theory in cooperation with the Von der Linden group of the in-house Institute of Theoretical and Computational Physics at TU Graz. The corresponding codes (open source available) can be in principal adapted for all coincidence techniques, where one deals with the problems of strong background signals and tedious measuring times due to low ionization rates.

And the link to the source code on GitHub:
https://github.com/fslab-tugraz/PEPICOBayes/