The research group in number theory exists since 1990. It has grown considerably since then:

We have regular contacts with colleagues in Debrecen, Zagreb, Budapest, Royal Holloway, Marseille, Nancy, Paris, Beersheba, Rostock, UNSW and Macquarie University, and many other places.

Our seminars are announced in the general TU Graz maths seminar list (fosp).

There are further seminars in algebra and number theory at Karl Franzens University Graz. 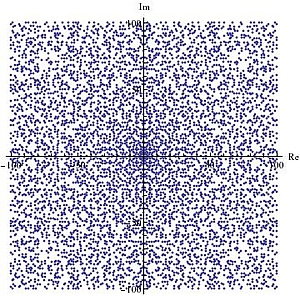 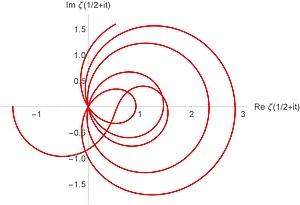 The picture on the left hand side shows the Gaussian primes around the origin, with real and imaginary part in [-100,100]. While these primes appear to be quite dense it is an open problem if it is possible to walk from the origin to infinity with steps of size bounded by an absolute constant. (The problem was posed at the International congress of mathematicians in 1962 by Basil Gordon.)

The picture on the right hand side shows the real and imaginary part of the Riemann zeta function zeta(1/2+it) in the complex plane, for t in the range from 0 to 34.