The ESA OPS-SAT CubeSat, the world’s first flying laboratory, will test new technologies for operational space applications. OPS-SAT was launched today at 09:54 CET from the European spaceport in Kourou in French Guiana, on board a Soyuz launcher. The mission will last at least one year. 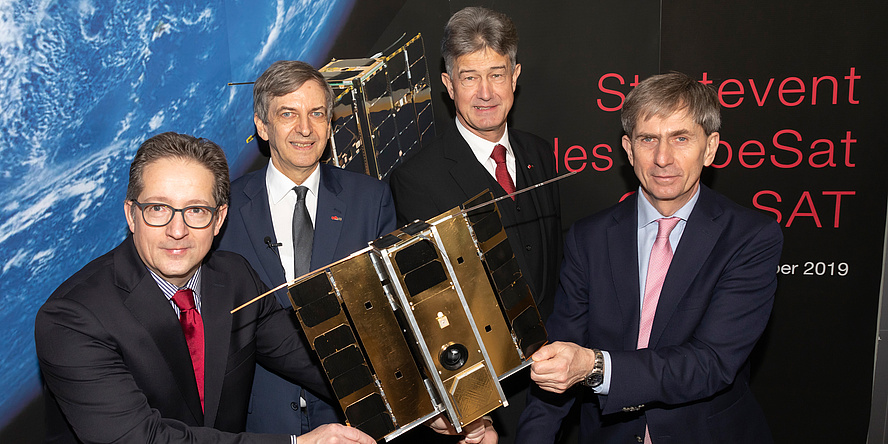 Additional pictures for downlaod at the end of the text

The aim of the OPS-SAT mission, which is being controlled from ESA’s European Space Operations Centre in Darmstadt, is to carry out low-risk tests on space software directly in the course of flight. Until now, such in-orbit tests have been avoided for reasons of reliability. Now, though, the OPS-SAT “flying laboratory” will validate new operating concepts in orbit. These range from the latest satellite control technologies to intelligent software for space vehicles, including on-board automatic image recognition systems and artificial intelligence. This enables ESA to test cutting-edge technology in a low-risk setting. “OPS-SAT gives us room to innovate. Although it is small, this CubeSat is bursting with potential, such as the opportunity to validate components of future exploration missions in orbit and test complex infrastructure on the ground,” says Rolf Densing, ESA’s Director of Mission Operations and head of the control centre. TU Graz is responsible for the technical side of ESA’s first CubeSat mission, which has been implemented at a cost of EUR 2.4 million; the administrative main contractor is UniTel IT-Innovation. Subcontractors from Germany, Poland, Denmark and Austria are also involved, alongside with suppliers from France and the UK. The launch service is provided by Tyvak International from Italy.

Otto Koudelka, the project manager of the industrial team and head of the Institute of Communication Networks and Satellite Communications at TU Graz, comments: “At present, communication standards dating back to 1994 are still being used in space missions. Radiation-hardened – and as a result very expensive – processors for use in space technology are lagging about ten years behind their terrestrial counterparts.” However, these technologies are still around for a reason – ESA and other space agencies put their faith in tried-and-tested technology due to its reliability, which makes it a safe option. In this respect, OPS-SAT is making an important contribution to innovation. “Now it’s time for something new,” Koudelka sums up. The OPS-SAT mission is a chance for ESA to develop and test new operational space applications. “OPS-SAT is the means for low-risk, cost-effective testing of new high-performance processors, radio and optical data receivers and space software under realistic conditions in space,” Otto Koudelka explains.

Over 130 experiments from 12 countries

The core of the 30cm x 10cm x 10cm flying laboratory is a high-powered processor developed at TU Graz. Software developed by OPS-SAT scientists and pre-tested on the ground at ESOC will be uploaded to the OPS-SAT processor from the ground station in Darmstadt. This processor has access to peripherals including a camera focused on Earth, optical and radio receivers, as well as an experimental altitude control system that will test new algorithms. A cryptography experiment using optical data transmission via laser, between the Lustbühel Observatory in Graz and OPS-SAT, is also on the agenda. In this data security experiment, a cryptographic key will be used to encrypt the radio channel that will send data to the ground station at speeds of up to 50Mbit per second. Remote sensing experiments using on-board image processing technology will also be carried out. In addition, a programmable radio receiver on the satellite is designed to detect interference signals coming from Earth in certain frequency ranges. OPS-SAT will enable entire software programs and a large programmable logic chip (field-programmable array) to be loaded and modified during flight. This will test ways in which flight software can be updated or modified reliably and securely during a mission, which will generate insights for future ESA missions. Despite its small size, the satellite has an uplink speed of 256kbit per second and a downlink speed of 1Mbit per second – the fastest transmission rate in the telemetry system of any ESA satellite to date; the standard rate is 64kbit per second.

The test phase will begin as soon as the European Space Operations Centre receives the first signals from OPS-SAT, which are due to arrive this evening at around 18:30. The first experiments will be performed after the commissioning phase.

TU Graz Rector Harald Kainz is delighted with the university’s successes in space research: “The TU Graz team headed by Otto Koudelka, the father figure behind the satellite, launched Austria’s first satellite, TUGSAT-1, into space and this laid the foundations for further missions like ESA’s OPS-SAT nanosatellite that was launched today.” TU Graz’s achievements in this field have also been supported by close links with major international players and local infrastructure partners. As Harald Kainz explains: “We work very closely with the Austrian Academy of Sciences’ Space Research Institute; with the Lustbühel observatory, an internationally recognised monitoring station for all kinds of space projects; TU Graz’s campus is home to the ground station for another international satellite initiative, the BRITE mission; and we have close ties with a number of Austrian pioneers in space research, such as the late Willibald Riedler, with Hans Sünkel and Wolfgang Baumjohann. Without doubt, Austria – and Graz in particular – is a high-profile international hub for space research.”

The costs of EUR 2.4 million for the satellite and its launch were covered by the following member states under ESA’s General Support Technology Programme (GSTP): Austria (33%), Germany (25%), Poland (29%) and Denmark (13%).

At least one year, with an option for a one-year extension
After four to six years, OPS-SAT will naturally re-enter the Earth’s atmosphere and burn up. The satellite meets the ESA guidelines on minimising space debris.

At its core is a very high-performance processor developed by TU Graz for the experimental payloads and conducting numerous software and hardware experiments. These include testing innovative procedures for conducting space missions and new transmission protocols; camera and remote sensing experiments with on-board image processing; radio signal analysis in space; data reception by laser for a cybersecurity experiment; and altitude control experiments.

OPS-SAT operates in the same way as all other ESA satellites and is compatible with the Agency’s ground control infrastructure – a new innovation for CubeSats. It communicates with the ground station in Darmstadt, transmitting data at rates of up to 50Mbit per second. Initial contact with OPS-SAT will be made at TU Graz, with the support of its UHF Ground Station.

OPS-SAT will be put into a near-polar, sun-synchronous circular orbit at an altitude of 515km. It will be in sunlight for most of its orbit, in order to ensure optimum electricity supply. 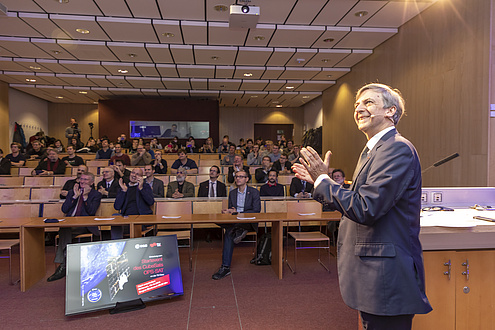 TU Graz celebrates the successful launch of the Soyuz VS23 launch vehicle on 18 December at 09:54 am with the CubeSat OPS-SAT on board. © Lunghammer - TU Graz 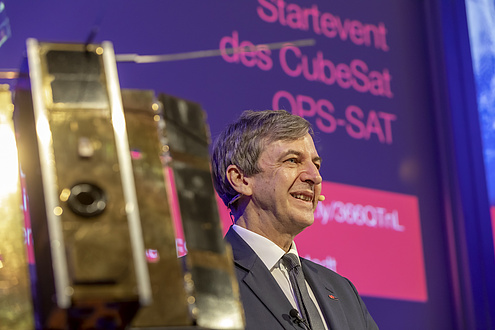 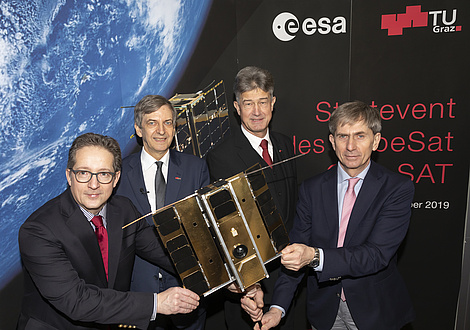 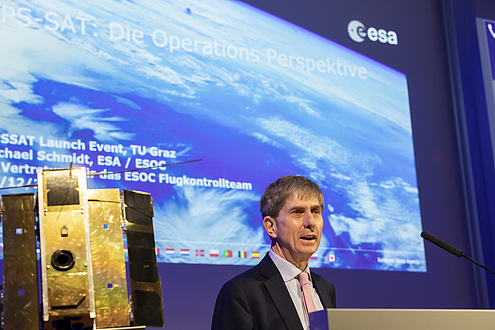 Michael Schmidt, Head of the Advanced Concepts and Management Support at ESA in Darmstadt was present at the launch at TU Graz. © Lunghammer - TU Graz 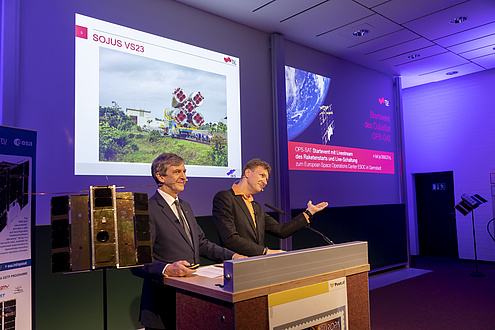