Gernot Müller-Putz and Stefan Mangard – even months after the announcement, you can still tell the joy from their faces. Both from TU Graz, they each have won an ERC Consolidator Grant. 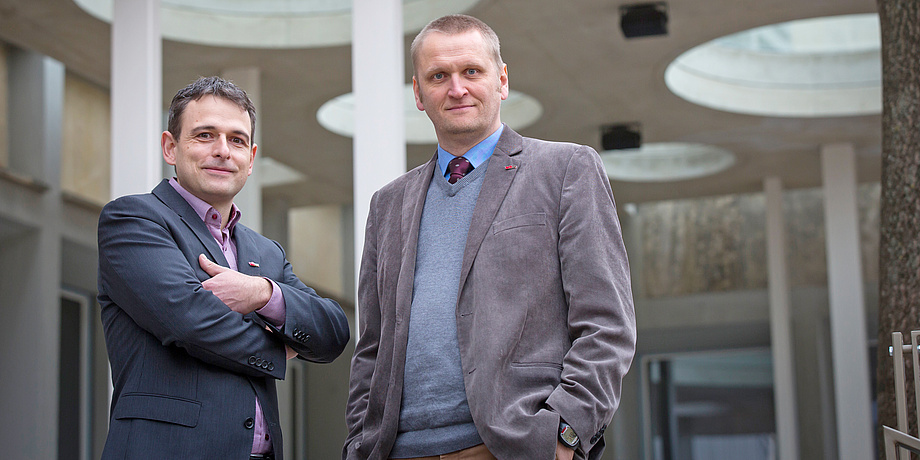 The successful researchers from TU Graz (from left): Stefan Mangard and Gernot Müller-Putz are pleased with their ERC Consolidator Grants.

Gernot Müller-Putz, from the Institute of Neurotechnology, and Stefan Mangard, from the Institute of Applied Information Processing and Communications, have one and a half years of preparation behind them leading up to their submissions to the European Research Council. The selection procedure is very extensive: first, a jury assesses a 5-page concept outlining the 5-year project. Only once this first obstacle has been overcome does the 15-page application, which is submitted together with the concept,  get read. If these 15 pages are also assessed positively, the project is then presented in Brussels in the course of just a few minutes, but with an approximately 20-minute questions and answers session. “During those few minutes, every word is exactly placed, with no improvisation whatsoever”, says Gernot Müller-Putz, “just like Marcel Hirscher in the slalom.”

But the effort pays off, as Stefan Mangard explains. “Through the basic research made possible in this way we can substantially move our topics forward.” The European Research Council awards various grants, so-called starting grants, to young researchers;  to those already anchored in the research community, consolidator grants, while those persons already well-established and acclaimed in the world of science receive advanced grants and, last but not least, those doing research, who have previously received a grant, get a follow-up grant for proof of concept. Back in 2013, Graz University of Technology was happy to receive two starting grants. In 2015 Graz even managed to be awarded two of the renowned and extremely sought-after consolidator grants. After all, they are worth two million euros each, over five years.

Neuroprostheses for paraplegics that can be controlled through thinking – this is the speciality of Gernot Müller-Putz. Currently, via neuroprostheses, simple grasping movements and raising and lowering the lower arm are possible. The purpose of the project FEEL YOUR REACH is to take this one step further to include complex movements sequences in three-dimensional space using the whole arm. Additionally, an artificial feedback system is to be created with whose help patients can learn to feel their movements again. “After all,” says Müller-Putz, “if you can actually feel your movements, you can carry them out better, too.”

The topic has accompanied him ever since 1998 when he was asked in a student project to build a robot that could be controlled by thoughts. “I did not have to think about it for long. If I sit here, and I can make something move over there just by my thinking about it, wow, that’s amazing,” he explains in his bright office in the building of Biomedical Engineering at TU Graz. But the medical side, too, plays a role here. “Paraplegics used to be told that their condition cannot be changed. Now, the question is if that is necessarily really so.”

Stefan Mangard’s field of research is located somewhere totally different, and not only locally. His office is at the TU Graz Inffeldgasse Campus. Stefan Mangard explores the security of computer systems and, at the moment, attacks which use the physical characteristics of the hardware in order to be able to access confidential data. “This can be done, for instance, by measuring the electricity consumption, observing the run-time behaviour, or surveying the electro-magnetic radiation,” the researcher explains. Another possibility is to interfere in the processor’s work externally, i.e. by raising the temperature or changing the voltage until the PC starts to make small errors. Such small mistakes as, for instance, a single memory location performing bit flips, may have a fatal impact on security. “For instance, the most trivial error is a bit error which accepts a wrong password entry as correct.”

At the moment, scientists are mainly dealing with coding systems to protect PCs against such hardware attacks. “Surprisingly, not so much attention is paid to the processors themselves although this is where all the sensitive data gets processed.” The objectives of the project aim high. “By the fifth project year I hope to have built a complete processor system in terms of a chip prototype which is really secure.” Later on, the technology behind it should be freely available and be able to be further developed in the research community. With the help of an ERC grant, you have the opportunity to create a real momentum, and this is exactly what I want to do.”