Between physics and philosophy

Physics and philosophy are Andreas Hauser’s specialities. He has a doctorate in both, but professionally, physics comes first. There are many sides to this 36-year-old – and not only in research. 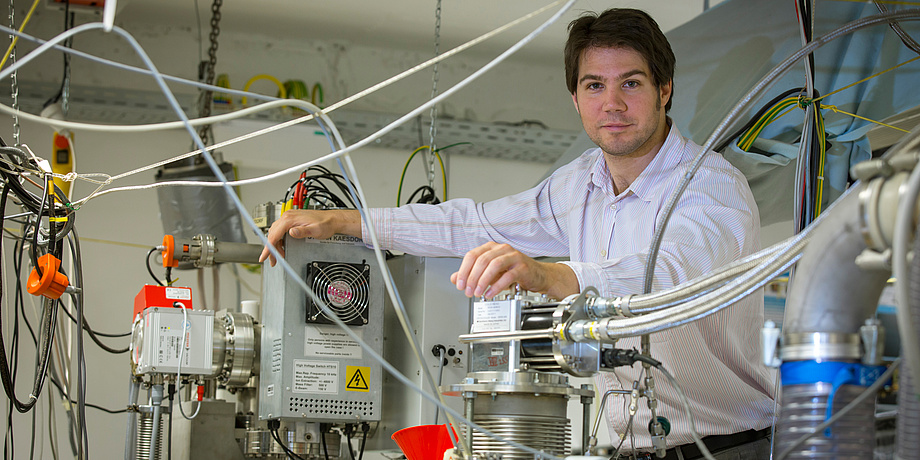 Researcher Andreas Hauser in his laboratory.
Philosophy and physics, according to Andreas Hauser, are two subjects which, though entirely different, supplement each other in many points. Because: “In physics, sooner or later, you come up against insurmountable limits to knowledge. But the questions you pose as a researcher don’t stop there, and then you enter the exciting field of philosophy.” For instance, when you deal with visions of artificial intelligence, parallel worlds, the relationship between mind and matter or similar. Or when you ask yourself questions, such as “What actually is ‘force’?”

What actually is ‘force’?

News+Stories: Where do the humanities and natural sciences overlap most impressively of all at the moment?

Andreas Hauser: Well, we could take artificial intelligence as an example, which is very topical. Google’s ‘DeepMind’ project is especially exciting. The company has recently designed a neural network (note: a kind of artificial brain) which can play Go extremely well. This complex, Asiatic board game is based on tactics, creativity and strategy. Up until recently, no single computer programme has been able to hold a candle to a professional player. But DeepMind’s AlphaGo computer programme was able to beat Korean Go-grandmaster Lee Sedol 4:1 in 2016. So it looks like the last hurdles have been gradually overcome. Computers have now beaten us for the first time ever in human core competencies. This has led to heated discussions between natural scientists and humanities buffs.

Computers have now beaten us for the first time ever in human core competencies.

Somewhere on my path I had to decide where I wanted to make a career, and I chose physics. But I wouldn’t draw the line so sharply between them. In our hectic times, researchers unfortunately don’t think much about how concepts of modern physics can be incorporated into a functional world view you can offer with a good conscience to someone who is not themselves a physicist.

Can you apply your philosophical knowledge to current research work?

Andreas Hauser: Not really at the moment. But I find the atmosphere at TU Graz and talking with colleagues very inspiring. I’ve noticed that my background in basic problems like formulating concepts is helpful in order to better categorise things, especially with very abstract concepts from quantum mechanics. Modern physics is very complicated. You have to spend a long time discussing particular things until you understand them sufficiently. This is particularly striking with quantum physics. You can’t really talk about it in a superficial way. On the one hand, for lay persons without a basic training in physics, it is very difficult to participate in the discussion in a meaningful way. On the other hand, physicists allow themselves to be drawn into philosophical outpourings which sound rather naive and uninformed at a humanities level. The often tangible arrogance on the part of scientists I find completely inappropriate.

Andreas Hauser: Yes.  Even when I was at secondary school in Judenburg, where I come from. Apart from physics, I was also interested in Latin and philosophy. After my studies at Graz, I went to New Zealand with my former partner and my now 15-year-old son, Jakob, where I worked at Massey University in Auckland. That was a wonderful time – both for research and for us as a family. If you’re a theoretical physicist, you have the advantage of not being bound to large sums of money or universities with high reputations. In this area, the one person who can support you with your ideas and help you develop them has much greater importance. In this my first stay abroad, this was Peter Schwerdtfeger, an expert in the field of relativistic quantum chemistry. After that I spent two years at the University of California in Berkeley and occupied myself with catalysis on metal particles – a subject which is becoming topical again in my present job. Together with the head of the Institute, Wolfgang Ernst, who provides the experimental input, I’d like to develop a new class of materials – mixed metal nanoparticles.

Andreas Hauser: We call them ‘nano Mozart Balls’. If you make Helium flow into a vacuum and cool it down to a few tenths of a degree above absolute zero, small Helium droplets are formed. If you then send these droplets through an array of metal vapour cells, they take up single atoms of metal which form small metal clusters within the droplet itself. Depending on dopant, this results in a certain shell structure, just like chocolate around a marzipan centre. You can adjust the physical and chemical properties of the end product to a certain degree through the choice of metals, which you vaporise. What’s more, these extremely small structures behave completely differently compared to the extended metal. In this way, you can intentionally produce materials with different properties. A possible application would be e.g. as catalysts for activating short-chained alkanes in order to link them together to form longer units. For instance, you could turn biogas into a fuel additive which is liquid at room temperature and thus easier to transport. 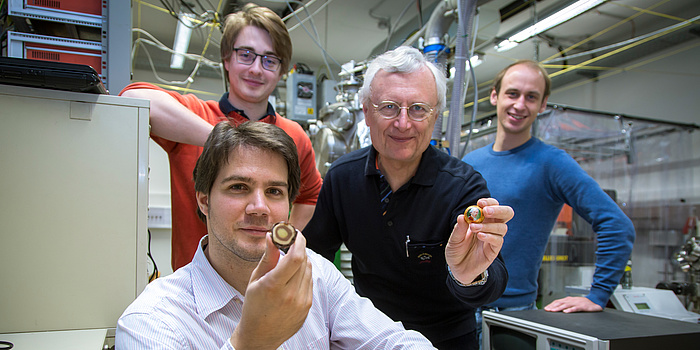 The "nano Mozart balls" team.
As a theoretician in this work I’m a bit ‘exotic’ at the Institute of Experimental Physics, but I’ve been lucky enough to fall on my feet. In the team, experimenter Wolfgang Ernst can bring his know-how to bear on the subject of nanomaterials and the entire technical facilities for the previously mentioned, extremely complicated synthesis method. Together, we want to see what we can get out of these metallic nano balls.

Your work sounds very demanding. You’re not only occupied with one research project, but you’re also active in a number of topics. Do you have any free time left over at all?

Andreas Hauser: Unfortunately, I’ve got very little time at the moment. In New Zealand we often went hiking, rock climbing or just played rugby on the beach. I even managed to unpack my paragliding outfit there. At the moment I just do indoor sports, like weight training and boxing.  Before my years abroad I was a passionate épée fencer for a while. I’ve still got my kit in the office for a couple of quick exercises now and again. Apart from that I play classical guitar and flute. Just like ‘Kiwis’ in New Zealand, I’m a bit of a night owl and often come back to the office in the evening to do some work. Yesterday, for instance, I was at the office until midnight, when I played a bit of flute. 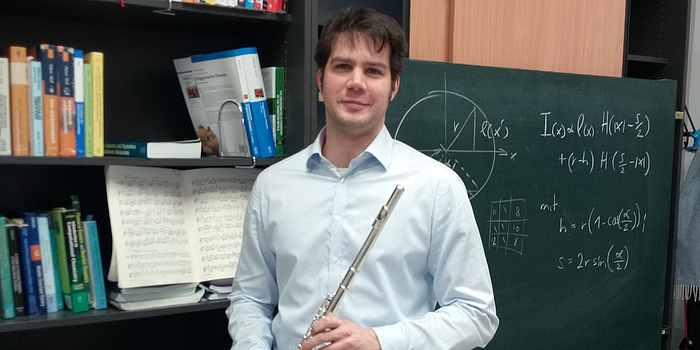 In the evening the researcher plays the flute - inside his office.

Doesn’t that disturb your colleagues?

Andreas Hauser: I once asked a colleague of mine in the corridor. He just said very dryly that he was used to it. In his previous office, in another wing, someone used to play the flugelhorn occasionally. Obviously, he hasn’t manage to escape! You don’t want to think too much about what goes on in the Institute of Experimental Physics at night. (Laughs) Oh, and then there’s my drone which I make test flights with in the Assembly Hall.
I love flexibility during working hours – as a theoretician you always have your office with you and only need a computer and a good internet connection. You often get the best ideas in different surroundings or during a break. When you let your imagination go, great things happen.

You’ve probably never ever been bored, have you?

Andreas Hauser: No. And if I am, I take out my Rubik's cube and practice a bit. But Dad doesn’t have a chance here. Jakob solves it in under one minute. Nerd.
Andreas HAUSER
Ass.Prof. Mag.phil. Dipl.-Ing. Dr.phil. Dr.techn.
Institute of Experimental Physics
Petersgasse 16
8010 Graz
Phone: +43 316 873 8157
andreas.hauser@tugraz.at