General
Switching operations occur in electrical power systems due to fault conditions or as a result of changes in the desired load flow. During these transient processes, high-frequency resonant circuits are excited, which can lead to overvoltages. These so-called switching overvoltages usually consist of a superposition of the operating-frequency voltage with high-frequency transient voltages.
Although these switching overvoltages occur over a relatively short period of the grid frequency, they have the potential to reduce the lifetime of the equipment or, in the worst case, even to destroy it. With the help of investigations using the simulation program EMTP (Electromagnetic Transients Program), the occurring voltages and currents can be calculated and measures for maintaining the limits of the equipment according to the manufacturer's specifications or the corresponding equipment standards can be analyzed. In addition to short-circuit currents, the switching of capacitive or inductive loads such as capacitor banks, reactors and transformers can be particularly problematic.

Figure 1: Modeling the switching of an inductive load with EMTP

Short circuit test
To further investigate the recovery voltage on a 110 kV circuit breaker after clearing a short-circuit current, measurements were taken at a substation. The measurement setup was then simulated in the EMTP simulation program and the main influence factors for the transient voltages occurring were determined through a sensitivity analysis. Figure 2 shows the measured voltages across the circuit breaker, where a re-ignition and two dominant transient voltages can be identified. 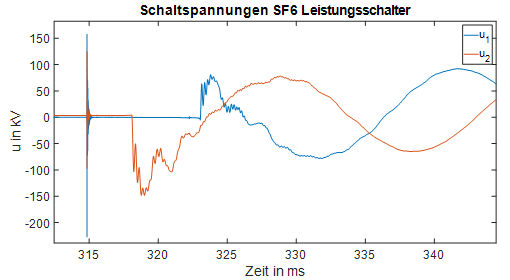 Switching of small inductive currents
Another critical case is the switching of small inductive currents which can occur due to the use of compensation reactors. In this case, high-frequency transient voltages can occur due to the early interruption of the current flow (current chopping), in case of re-ignitions and due to resonance circuits. Whereby the occurring voltage maxima and the gradient of the (recovery) voltages are of particular interest. This can cause damage to transformer and reactor windings as well as to the circuit breaker itself. As a remedy, system-optimized RC Snubbers and properly designed surge arresters can be used.

Figure 3: Transient recovery voltage (TRV) at the circuit breaker when inductive currents are switched off