Power-Hardware-In-the-Loop Labor am IEAN
The trend of future energy systems is moving in the direction of converter coupled power systems. In contrast to conventional power systems, the dynamic properties of converter-coupled power systems heavily depend on the implemented control strategy. This fact leads to an increased need for research in the area of grid connection behavior of such systems, with a focus on critical conditions of the grid and grid-side fault situations. The realistic examination can be carried out by using so-called hardware-in-the-loop methods, mainly for simulation verification. 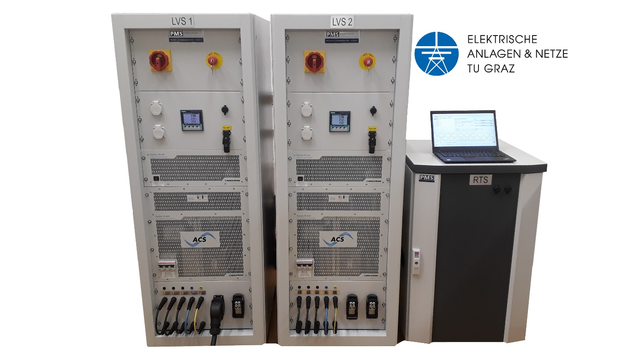 By using this method, converter-based systems can be examined in a realistic manner during the network planning phase, and in order to check future network expansion measures, network operators can carry out stability tests with suitable models before commissioning.

Problem and solution
Energy generation and consumption, based on grid connected power electronics systems, offer the advantages regarding flexibility in operation, however, there are also challenges in their implementation, for example, the stability limits in operation must not be violated. In order to be able to guarantee the stability of the electrical energy system with a supply from power electronics based units, a verification of the fault behavior in the grid connection mode is necessary. However, the current standard test methods often do not correctly cover real fault situations in the grid. In some cases, a loss of stability was observed when voltage dips occurred, even though the generator units had correctly passed the standard tests. The reason partly lies in inadequate test methods, which cannot fully reproduce the complex behavior of a fault event. For this reason, a new, more realistic approach should be used to validate the grid behavior of converter-based systems. This approach is based on the use of power / controller hardware-in-the-loop (PHIL or CHIL) systems, which makes it simpler, more realistic and also more extensive to research on the grid connection behavior.

Applying Research Methods in the PHILlab
The holistic view of the grid connection behavior of converter-based systems can usually be achieved by great effort or not at all by simulations. In order to verify the simulation models and to get realistic results, hardware-in-the-loop methods are used. The following existing laboratory equipment enables comprehensive system testing for grid connected (converter based) systems.

Controller-Hardware-In-the-Loop (CHIL)
By using a CHIL (controller hardware-in-the-loop) equipment, the control system of the converter can run on a real controller environment like an FPGA. All other physical quantities are simulated by a real-time control system.

Bild 2: Scheme of a CHIL Setup with FPGA

The embedded control technology card receives the currents and voltages information of the simulated system and calculates the resulting PWM signals, which returns to the control system. The advantage of this method is that a real control system is used here. These cards can be used directly by a real converter. In order to provide meaningful results from the simulation by CHIL, the entire power electronics system must also be simulated.

Power-Hardware-In-the-Loop (PHIL)
The PHIL (Power Hardware in the Loop) method is based on the CHIL test method. In this configuration, not only the control technology card is used, the entire converter systems are installed physically.

Fig. 3: Scheme of a PHIL test setup with real converters

The grid and the generation unit are evaluated in a real-time simulation and then related data are transferred to the converters via a power amplifier. Here, the power amplifier outputs the calculated voltage at the connection terminals and calculates the new voltage based on the current feedback for both the grid and generator sides of the converter. In this configuration, the converter must behave as in a real environment. Since the converter is available in this system, all other simulated disturbances such as latency times and transducer tolerances are immediately taken into account.